7 Quirky Facts About Countries Around the World

Fascinated by the different cultural practices around the world? Here are some quirky facts about different countries you probably didn’t know. 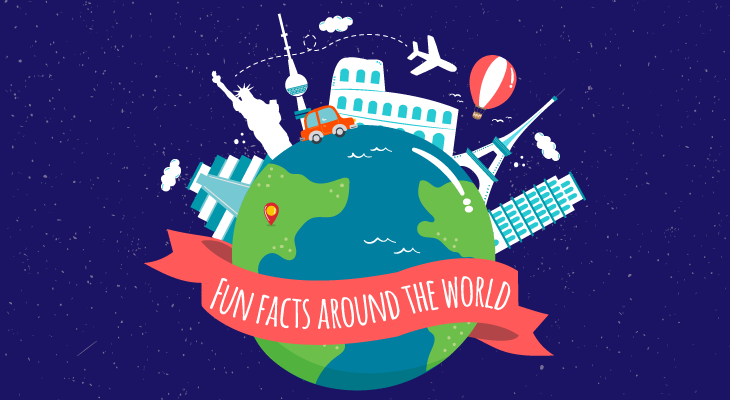 Did you know before Malaysia was formed, the Malay Peninsula’s first given name was called  Aurea Chersonesus (meaning the Golden Peninsular)?

But, Malaysia isn’t the only country with fascinating facts about its history and culture — every country in the world has its own story and surprising facts you may have never heard of. Well, if you enjoy learning about the different cultures of nations around the world, you’re in for a treat as we’re revealing 7 interesting facts about various countries across the globe!

Typically, Malaysians are known for shortening their sentences. For instance, instead of “What are you going to eat?” you say, “You eat what?” and instead of “How will you be going to college?” you say “How you go college ah?”. You get the hint. But Malaysians aren’t alone in simplifying the English language.

The Aussies (Australians) are also notoriously known to shorten their words. And it isn’t a surprise given their naturally laid back nature. Some of the most common words they shorten are g’day (good day), arvo (afternoon), biccy (biscuits), cuppa (a cup of tea), Macca’s (McDonald’s) and they even shorten Australia to Straya!

So if you’re heading to Straya anytime soon, you’ll want to do some homework so you can understand their slang better.

If studying in Australia floats your boat, you could consider pursuing the Australian Matriculation, a pre-university course you can take before flying off to the Land Down Under.

In many countries around the world, especially in the West, people often perceive those who eat noisily at the table as rude and unsophisticated. And to some, it can even be a pet peeve. There are also people with a known disorder called misophonia, who can’t stand hearing the sound of eating or chewing. This, however, does not apply to the people living in one of the most developed countries in the world — Japan.

In the land of the rising sun, Japanese people welcome the sound of slurping (especially when you eat noodles). In fact, it is considered rude if you don’t! This is because in Japan, slurping your noodles loudly is a sign that the food served is delicious and you’re enjoying your meal. It’s even argued that slurping is a way to savour the aroma of soba noodles.

If you’re a big fan of everything Japanese, studying in Japan could change your life forever.

#3. Cheese rolling in the United Kingdom

Do you like cheese enough to consider chasing after it down a very steep hill? Well, in the United Kingdom, you’ll get the chance to prove your love for cheese by doing just that.

Every year, many people from across the world travel to Cooper’s Hill in Gloucester, England to chase after a 7 to 9-pound wheel of cheese rolling down the hill (which has now been replaced by a foam replica for safety reasons). Whoever reaches the bottom of the hill first wins the real cheese.

How did this strange event come about? There's a couple of theories. It is said that the event began as a pagan ritual to welcome spring but others claim that this century-old race was used to reclaim common grazing lands back in the day. Traditionally, the event was only held for people in Gloucestershire but now it’s a world-famous event that’s open to everyone. So you can even try your luck!

Fond of British culture? The Cambridge A-Level programme could help you get one step closer to studying in the United Kingdom.

When someone asks you “How old are you?” usually, you would be able to reply with ease without trying hard to think. That, however, isn’t the case for Koreans. Try asking them this and they’d have to think twice before giving you an answer.

Unlike many of us, Koreans are automatically a year old when they’re born because the 9 months spent in the womb is rounded up to a year of life. And come January 1st, another year is added to their age since it is a new year. So, a person born in 2001 would be 18 (in 2019) everywhere else, but in Korea, he or she is considered to be 19. And on New Year’s Day, they would be 20 years old. Complicated? We think so too.

Love Korean culture? Here’s why you should study in Korea.

#5. Hanging up lost objects in Germany

What are the chances of you finding your lost item in a public space? Close to zilch perhaps? Well, in Germany, you are very likely to find the missing item. Unlike the stereotypical conception that Germans are cold and aloof, the citizens of this efficient first world nation tend to care for each other a lot.

Should you come across a hat or a mitten or anything at all dangling from a tree or signpost, you can rest assured you’re not encountering a mythical entity. Rather, this is what people in Germany do when they come across lost items on the ground — they hang it up so it’s easier to be seen. This way, the owner would be reunited with it when they retrace their steps!

Did you know that education is free in Germany; including for international students? Find out more shocking facts about Germany and how studying there could destroy your life!

What comes to mind when you order a Hawaiian pizza? You’d probably imagine it being topped with tomato sauce, cheese, pepperonis and of course, pineapple pieces. If you’re a pineapple lover, we hate to break it to you, but the Italians simply do not believe in having pineapples or any fruit on their pizzas.

Italians are known to be very traditional, especially when it comes to food. According to them, pizza is a savoury dish so there shouldn’t be any fruits on it since fruits are usually sweet. In fact, you’ll almost never find the Hawaiian pizza (which ironically originates from Canada and not Hawaii) being served in Italy. And if you ever try to order it, you might be faced with a horrified waiter!

Meanwhile across the world, the argument about whether pineapples should or should not be on pizza continues...

#7. Tipping in the United States

For many of us, it’s common to only give the bare minimum whenever we pay our bills at restaurants since the sales and service tax is usually included in the bill. You’re probably also guilty of closing an eye to the tipping box on the cashier counter. However, in the United States, it’s considered rude for you to not leave any tip when you pay your food or beverage bills.

Patrons typically have to leave a 10 - 20% tip when making payments at restaurants. This is because people in the food and beverage industry receive relatively low wages so the service crew rely a lot on a customer’s tips to make a living. There are also a different set of rules for tipping other service personnel like bartenders or the delivery people. So don’t forget to do your research and leave a tip if you’re visiting the United States!

Interested to experience American culture? The American Degree Program can help you transition easily to study in America!

As you can see, there are many different cultures that exist around the world, so it pays to do a little digging about a foreign country’s customs before you visit it or pursue your studies there. Else, you might experience culture shock.

Want to study overseas but don’t know how? Our Education Advisors can help you.