Curiosity Strikes Again: 7 Random Questions That Keep You Up All Night 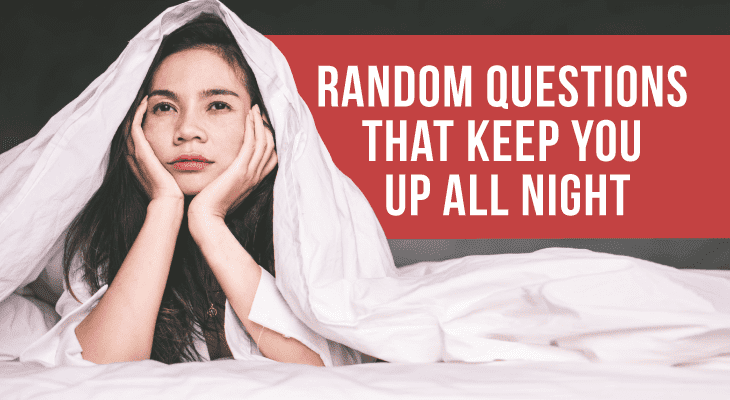 Having a train of thoughts before sleeping is pretty common — they just keep you awake all night long. Apparently, they are just random questions popping into your head, making you wonder the entire existence of how, what or why.

Here, we list some of the mind-boggling questions (with answers, of course), in case you’re still in the maze of thoughts. Read on.

#1. Vegan vs. Vegetarian: What’s the difference?

Sure, the two may sound kind of familiar, but the terms vegan and vegetarian refer to two very distinctive styles of eating. Considered as the strictest form of vegetarianism, veganism is more than just a diet — it is a way of living. In addition to not eating animals — similar to a vegetarian — a vegan eliminates any and all animal byproducts or food made or derived from animal products. More like an ethical stance, veganism is a lifestyle and a philosophy that recognises that animals have a right to be free of human use and exploitation.

A vegetarian is someone who doesn’t eat animal flesh, period. However, some vegetarians do consume byproducts that do not involve the slaughter of animals (e.g. eggs, dairy products, honey). Also, there are different types of vegetarians: Lacto-vegetarians do dairy, but not eggs; Ovo-vegetarians ditch the dairy but keep the eggs; while, Pescatarians avoid all meats except fish and other types of seafood.

#2. How bad is it to be binge eating like the YouTubers in meokbang videos?

Meokbang (Meogo bangsung), literally translated as eating shows, is a viral phenomenon started from South Korea in 2011. Featuring someone who eats calorie-rich foods in giant portions, for an online audience — the question is: wouldn’t binge eating like the Youtubers in the meokbang (or mukbang) videos take a toll on their health?

While some argue that becoming a mukbang star is worth all the effort of gorging oneself with days’ worth of food in one sitting — because you’re getting paid — other health experts beg to differ. Gastroenterologist Dr. Samantha Nazareth commented that such eating habit portrayed in the videos may actually have adverse effects on viewers’ health. Some shocking revelations from behind the scenes of this “eat a lot, yet not gaining (much) weight” viral phenomenon include developing issues often found in obese adults (e.g. difficulty managing their sugar levels), disrupting the digestive system, or worse, eating disorders such as anorexia and bulimia.

Really, it’s quite a roller coaster to put your body on.

Sloths are known as the lethargic animals as they move (way much) slower than any other mammals on Earth. On average, sloths travel 41 yards per day. Contrary to popular belief, sloths don’t spend most of the time in a day sleeping. They actually do move, but very slowly in order to conserve energy as their diet consists of plants like leaves, twigs, buds and fruits (yes, they’re herbivores!)

Quick facts: jellyfish have neither a brain nor respiratory system. So, exactly how do they breathe?

Jellyfish have such thin tissue, making it easier for oxygen to diffuse into their cells. They can get most of the oxygen they need from diffusion without any specific type of respiration. Despite their lack of a respiratory or circulatory system, jellyfish can thrive in low-oxygen waters.

How awesome is that!

The answer is no. They may look the same — both have ten legs and possess external skeletons. But, that’s the only similarities they have.

Prawns have branching gills, claws on three pairs of their legs and second pincers that are larger than their front ones. Shrimp, on the other hand, have lamellar (or plate-like) gills and claws on two pairs of their legs. With typically large front pincers, prawns are, however, unable to bend their bodies sharply the way shrimp can.

Also, another distinguishing factor is their habitat. Prawns live in freshwater, whereas shrimp can come from either freshwater or saltwater (though the majority of species come from saltwater).

In 2013, the European Space Agency’s Planck space mission released the most accurate and detailed map of the universe’s oldest light. The light that has reached us from galaxies is 13.8 billion years old. In other words, we can look at a region of space that lies 13.8 billion light-years away.

Despite that, the galaxies right on the edge of the observable universe, whose light has taken 13.8 billion years to reach us, must now be 46.5 billion light-years away as the universe is constantly expanding. Kartik Sheth, a programme scientist at NASA, theorised that the universe is expanding much like the way a balloon expands when it is inflated. “Imagine putting dots on the surface of a balloon — each representing a galaxy — and then blowing up the balloon. As the balloon expands, the distance between the dots on its surface grows. “ Just like the universe.

Psst, if you still cannot imagine how big the universe is, maybe this comparison can help.

#7. Alpacas and llamas: Are they the same thing?

Alpaca and llama are often mistaken as the same animal. But they’re not. In fact, there are many distinct differences between the two species. The most obvious ones are the features.

These million-dollar questions are not something really talked about often, yet, they pop out in our minds from time to time. Clearly, there will always be something which we wonder its existence. To quote one of the world famous physicists of all time, Albert Einstein, “The important thing is not to stop questioning. Curiosity has its own reason for existing.”

Still have problem falling asleep? Maybe these tips can help you sleep better at night. 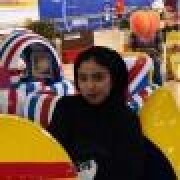