Need a break from all that studying? Here are the top TV shows related to your degree that will keep you entertained for hours. If you’re tired of trudging through textbook after textbook, it’s time to turn to TV shows because there’s a lot we can learn from the media we consume.

While they may not be 100% accurate, some of these shows have gone out of their way to aim for as much accuracy as possible, going as far as to employ real professionals as consultants. We don’t encourage taking them at face value but we still think that you’ll be impressed at how eerily realistic some of these shows are.

We know what you’re going to say — “Grey’s Anatomy is right there!” And we hear you.

Grey’s Anatomy is undeniably one of the most famous examples of a medical TV show but ultimately, we just have to go with Scrubs. This is because not only do we need more comedy and less tragedy in our life, Scrubs is also often cited as one of the most accurate medical shows on TV.

The medical comedy follows John "J.D." Dorian, a medical intern, as he goes through his day-to-day routine at the fictional Sacred Heart Hospital. Other characters include his fellow interns, Elliot Reid and Christopher Turk, Perry Cox, an attending physician and JD’s unofficial mentor, and Carla Espinosa, the hospital’s head nurse.

For those of you looking forward to working in the hospital, the show gives you a good insight at what generally goes on in the life of a young doctor.

HBO’s Silicon Valley follows the adventures of a fictional startup’s CEO and founder, Richard Hendricks, and his fellow employees as they develop a revolutionary and highly sought-after compression programme.

While some parts of it are dramatised for satirical purposes, the show tries to stay true for most of the more technical aspects. In fact, for its third season, Silicon Valley consulted up to 250 experts to ensure its portrayal of compression technology is as accurate as possible. This is on top of its own team of consultants, some of whom worked with tech giants like Google, IBM and Facebook.

Drawing from co-creator Mike Judge’s experience as an engineer at a Silicon Valley startup, this comedy gives an eerie insight into Silicon Valley’s tech startup and venture capitalists culture. This, coupled with its dedication to accurately portraying the technology, makes it a perfect show for curious students of computer science and software engineering.

When it comes to entertaining and intriguing political TV shows, most of us would immediately think of HBO’s Game of Thrones or Netflix’s House of Cards. Which is why we are going to suggest that you give Veep a try instead.

In HBO’s Veep, Julia Louis-Dreyfus plays Selina Meyer, the fictional Vice President of the United States. The critically-acclaimed show follows her and her team as they attempt to manoeuvre day-to-day politics while trying to build a lasting political legacy.

A political satire at its heart, the show is definitely not the most accurate representation of how politics really is but some of its wacky storylines actually did end up predicting real-life events. So for students and passionate followers of real-life politics, it can definitely be an entertaining piece of work.

Known as one of those few shows that actually managed to maintain its quality throughout its full run, Breaking Bad is another must-watch HBO original.

Terminally ill high school chemistry teacher Walter White, facing a mid-life crisis and desperate to make sure his family is well-provided after his demise, started using his chemistry knowledge to produce and distribute methamphetamine, an addictive street drug also known as crystal meth.

Together with his partner-in-crime, Jesse Pinkman, the duo gets into all sorts of trouble, with White often drawing on his knowledge as a chemist to bail them out. While it’s not perfect, the chemistry portrayed in the show is actually pretty accurate, thanks to the show’s chemistry advisor, Donna Nelson, a chemistry professor from the University of Oklahoma.

It’s not a traditional insight into what a career in chemistry would look like but the show does a good job of making chemistry look cool, a fact that’s appreciated by many working in the chemistry and pharmaceutical industries.

Philosophy can be hard to comprehend. So when The Good Place — a family-friendly sitcom that tells its story through clever use of philosophical dilemmas and concepts — surfaced, the world fell in love with it.

The premise of the show is simple — upon her death, amoral Eleanor Shellstrop is mistakenly sent to The Good Place, the in-universe equivalent of heaven. Afraid of being discovered and thrown to The Bad Place, she enlists the help of her assigned soulmate, Chidi, an ethics professor, to help reform her into becoming a good person and earning her place there.

Through Chidi’s extensive knowledge of ethics and philosophy, the series often uses philosophical concepts like utilitarianism, moral philosophy and many more in creative and engaging ways to craft its narrative.

If you’re a student of philosophy or just someone looking to expand their horizon and increase your knowledge, The Good Place is a good place to start.

#6. Business: The Office US

If you’re studying Human Resource or Business Management, The Office US is a must-watch. The sitcom, a remake of its equally popular UK counterpart, follows the daily lives of the employees of the fictional Dunder Mifflin Paper Company in Scranton, Pennsylvania.

Notable characters include Michael Scott, the well-intentioned but often misguided regional manager, Dwight Schrute, the power-hungry salesman, Jim Halpert, another salesman who’s involved in an office romance with secretary, Pam Beesly, and many other colourful characters.

It’s a good introduction to the type of people that you might meet in the working world. Most of these characters are obviously exaggerated for entertainment purposes but you can never be too ready.

If chemists have Breaking Bad, then physicists have The Big Bang Theory.

This sitcom follows the daily lives of socially-awkward physicists Leonard Hofstadter and Sheldon Cooper, their new neighbour Penny, and their friends Howard Wolowitz and Raj Koothrappali. As the show progresses, they are later joined by other characters including neuroscientist, Amy Farrah Fowler who is played by real-life neuroscience PhD graduate, Mayim Bialik.

Throughout its 12-season run, the show often includes references to scientific concepts and theories and geeky pop culture references, including cameos by celebrity scientists like Neil deGrasse Tyson and Stephen Hawking.

The Big Bang Theory is both entertaining and informative. With the help of David Saltzberg, an astrophysicist and the show’s science consultant, the show often repackages science concepts in a generally palatable way without straying too far from real-life science. This makes it an amazing choice for science enthusiasts, regardless of their science background.

Occupational Safety and Health (OSH) is a very important field and many industry leaders are waking up to this reality. Considered one of the most in-demand jobs this year, the field is concerned with the safety, health, and welfare of workers at the workplace. If you wonder why OSH is so important, then you might want to give Chernobyl a watch.

Featuring a stellar cast including  Jared Harris, Stellan Skarsgård and Emily Watson, this HBO’s original revolves around the Chernobyl nuclear disaster of April 1986 and the cleanup efforts that followed. It also features the reaction of those affected by the incident.

With only 5 episodes, the miniseries doesn’t take that long to finish. However, it’s not an easy watch. Nonetheless, it’s worth a watch as a necessary reminder that all over the world, poor working conditions have led to countless preventable deaths.

Mad Men follows protagonist Don Draper, a war veteran who has managed to reinvent himself into a successful advertising executive in the fictional Sterling Cooper advertising agency.

Set to the backdrop of New York’s 1960s advertising culture, the show’s ongoing storylines focus on the world of advertising, while also delving into Draper’s relationships with his family, friends and colleagues.

It’s a relic of a bygone era and the advertising world today is obviously different from what we see in Mad Men. So, don’t expect 100% authenticity there. However, the show is still lauded for its commitment to portraying accurate depictions of the aesthetic and culture of the era.

Based on Tina Fey’s background as a writer for the famous sketch comedy, Saturday Night Live, 30 Rock follows the hectic life of head writer and showrunner, Liz Lemon, played by Fey.

As the showrunner of a fictional live sketch comedy show, Lemon must learn to manage the talents, her best friend and actress, Jenna Maroney (Jane Krakowski), and the unpredictable Tracy Jordan (Tracy Morgan), while also dealing with network executive Jack Donaghy (Alec Baldwin).

Featuring an ensemble of celebrity cameos, this fast-paced comedy provides a slightly exaggerated but nonetheless interesting insight into what media production looks like from behind the scenes. So for students of communications and broadcast media, this is the show for you.

So there you have it. Studying is great but you also need to rest and there are so many great TV shows out there so don’t forget to go out and explore. Remember, all work and no play, makes Jack a dull boy.

Looking for something more engaging and interactive? Check out these 6 awesome games related to your degree. 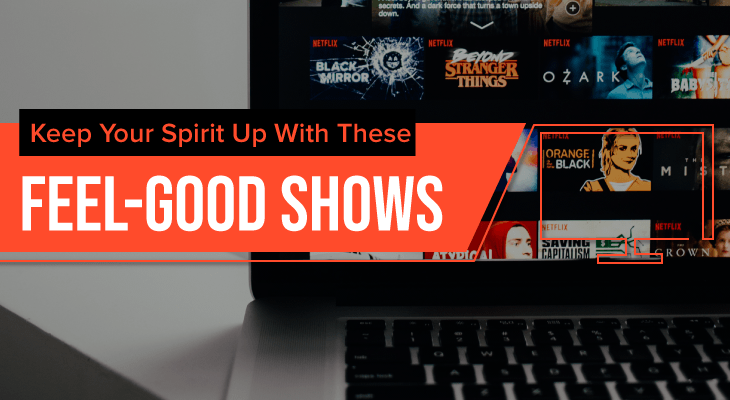