10 Dangerous Foods for Your Brain

Did you know that consuming too much of certain foods can negatively impact your brain’s performance? Here are 10 foods that can be harmful to your brain. 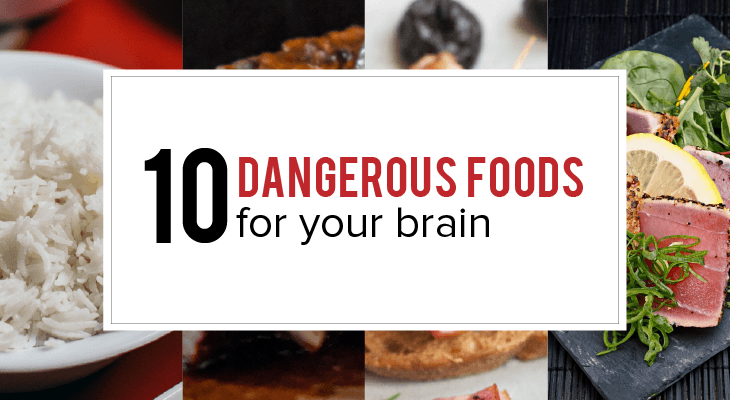 Does the saying “You are what you eat” sound familiar to you?

While you probably won’t end up looking like a burger if that's your staple day in day out, what you eat can affect the function of your brain and your mood too.

So if you’re wondering what foods are dangerous to your health and brain, here are 10 foods you should avoid if you want optimum brain function.

Let’s kick things off with this Asian staple — white rice. Whether you’re having Chinese, Malay or Indian food, you’ll find that white rice goes undeniably well with a variety of dishes. This makes it so hard to resist.

Unfortunately, white rice, as well as other refined grains (i.e. grains that have been chemically processed) such as bleached flour and white bread, can cause spikes in your energy level and lead to a crash several hours later, setting off a brain fog. This is why you struggle to retain what you’ve studied and feel tired and lethargic after a heavy lunch of banana leaf.

If you need to eat rice, switch to brown instead rice as it is more nutritious and has fibre (which is needed for good digestive health).

You probably don’t need us telling you that fast foods like burgers made with processed meat, fried chicken, french fries and other deep-fried goodies are oh-so-good but are unfortunately rich in trans fat, saturated fat, sodium, sugar, preservatives and a slew of other harmful ingredients — the perfect recipe for a stroke or heart attack!

Aside from causing heart diseases and obesity, there have been many studies indicating that regular consumption of fast food or junk food can cause memory and learning problems. This is because diets that are high in fat can affect the healthy production and functioning of brain synapses, which are responsible for memory formation.

Processed meats don’t only contain fat, but they are also made with other harmful chemicals. If you’re craving burgers, opt for ones made with chicken breast instead.

A favourite beverage after water and coffee!

There’s no denying that sipping a beer or a tasty cocktail after a long week of classes can take the edge off, but a study has shown that even moderate alcohol consumption over a long period of time can damage your brain, especially your hippocampus (your brain’s memory bank). The more you drink, the higher the chances of this happening!

While there is no official guideline for alcohol consumption in Malaysia, most countries recommend a standard average of not more than 20 grams of alcohol a day (2 standard drinks).

Although dipping your sushi in soy sauce for a little bit of added flavour may seem harmless, did you know a mere 1 tablespoon of the stuff contains as much as 900 milligrams of sodium? That’s almost 40% of the recommended daily intake!

Why is too much salt bad? Well, aside from causing high blood pressure and increasing the risk of cardiovascular diseases (e.g. heart attack, stroke), it could also lead to disorientation and problems with memory and thinking — not great when you need to be cramming for exams.

Although soy sauce isn’t that great for health, you can still enjoy it in moderation. Just be sure to buy the naturally fermented ones instead of those that are chemically produced.

It’s true that healthcare professionals recommend eating foods rich in omega-3 at least twice a week to reduce the likelihood of heart attack and stroke. This includes fish such as salmon, mackerel and tuna.

But beware, as too much could be dangerous for your brain! Fish like tuna, ahi, shark and swordfish contain high amounts of mercury that can cause as much as a 5% dip in cognitive function if taken in excess.

It’s perfectly fine to indulge in high-end steaks every once in a while, but did you know that the rib-eye steak is also the fattiest cut of beef? A portion of steak (about 251 grams) contains a whopping 48 grams of fat — that’s 73% of your recommended daily intake with just one meal!

Not only is having this much of fat in a single serving bad for your heart, but consuming that much saturated fat can contribute to the development of Alzheimer’s disease and affect your cognitive function too.

With the word “diet” in its name, diet sodas can’t be bad, right?

For example, aspartame has been shown to cause headaches and insomnia as well as compromise learning. So, just because the word “diet” is present doesn’t mean it’s good for you!

Smoked beef, turkey cold cuts and breakfast bacon… there’s no denying that these foods are delicious but too much of cured meats can actually cloud your brain.

How? Well, because these meats have high salt content, your body has to draw water from your system to flush out excess salt. But if you’re not drinking enough water, your body will extract water from your cells, leaving you feeling dehydrated.

The problem with this is that even the mildest of dehydration can impair your brain function and working memory, which can impact your studies negatively.

If you decide to nosh on these cured meats, just be sure to chug a gallon of water so that your body doesn’t have to work overtime.

A quick microwaveable meal after a long, tiring day of uni seems like a great idea, but did you know that consuming too much frozen dinners will not only lead you down the path of obesity, but it could also slow down your brain’s performance too?

This is due to the high amounts of hydrogenated oil or trans fat in these meals, which have been shown to diminish mental performance and cause cognitive decline. At the same time, it could also increase your risk of Alzheimer’s disease!

Aside from frozen meals, there are many other foods that contain trans fats such as cookies, microwave popcorn and margarine. So be sure to check the ingredients label the next time you’re grocery shopping!

“Made with 100% real fruit juice” may be what's written on your favourite go-to fruit juice in the supermarket. If you find that it tastes sweeter than fresh-pressed juices, that’s because it is!

Most store-bought juices have higher amounts of added sugar and preservatives, ensuring longer shelf life than fresh juices you get from restaurants. This is bad because too much sugar not only leads to diabetes but it can also restrict blood flow to the brain and slowly damage it. So don’t be fooled by “real fruit juice”!

To be safe, make your own juice at home using a blender or cold press juicer.

Not all foods are evil! Check out these 7 foods that will give you some much-needed brain juice.