Struggling with college? Don’t beat yourself down. Here’s some advice you should keep in mind. Barely passed your last paper? Struggling to perform academically? Is college life too much for you?

Student life is not easy and sometimes you stumble. But that’s no reason to beat yourself down. Here are 6 pieces of advice for you.

#1. You are more than your results

First of all, don’t let this setback define you. You are not a failure nor are you a bad student just because you’re not performing well academically.

Perhaps you have spent a lot of time and effort revising but nothing seems to stick. Or maybe you’re experiencing financial problems or personal issues, which in turn are affecting your studies. It happens to everyone — you’re not weak for having to deal with it.

While others might use this chance to brand you as a failure, you should never do that to yourself. Remember, you are much more than what a piece of paper says.

#2. There are plenty of people who have failed before

Think of big names like Walt Disney and Oprah Winfrey. You’d have to be living under a rock not to know who they are. But once upon a time, they were failures too.

Walt Disney was once fired from an animation job because he supposedly “lacked imagination”. Imagine telling that to the guy who founded one of the biggest entertainment companies in the world.

Oprah Winfrey was told that she was “unfit for television news”. Today, she’s worth more than US$2.5 billion. Turns out, Oprah, according to comedian Leslie Jones, just needed to get fired before she could become the Oprah Winfrey.

Plenty of people before you have been in the same position. In fact, the world is full of successful failures — people who have failed and bounced back stronger than ever. This is just a momentary setback and like them, you too will get past this.

It’s easy to lose sight of the big picture when you’re buried in the details. Yes, your education is important. After all, it can open many doors and is one of the most potent tools for social mobility. So it’s understandable that you feel like it’s game over if you’re doing badly.

But failing a paper is not the end of the world. You can always retake the subject or repeat a semester. Sure, it sucks but it’s only a small blip in the grand scheme of things. Not doing well in all your subjects? How about changing your major?

Doing well in school is important and you should always strive to do your best. But once that’s done and dusted, there’s always more to do and other opportunities to look forward to. This is not the end of the line. It’s just the start of another journey.

Did you know that Albert Einstein, arguably the most famous scientist of all time, was a late-talker? He apparently couldn’t speak in full sentences until he was 5 years old. The Einstein Syndrome — where children are late in developing their speech ability — was named after him. Considering how he ended up becoming a highly celebrated scholar, it’s not too far of a reach to say that he made it after all.

You might feel pressured to graduate and get a job before a certain age but there’s no hard rule about this. Putting pressure on yourself to work on an arbitrary schedule imposed by society will only burn you out and send you crashing down.

As Mulan’s father said in the classic Disney animation, “My, my, what beautiful blossoms we have this year. But look! This one's late. But I'll bet that when it blooms, it will be the most beautiful of all.”

In a way, we’re just like flowers. We bloom on our own time. Recognise your limit and capability and accept that you might walk at a slower pace, but know that you’re walking. Don’t push yourself and take your time. Everything will fall into place eventually.

So, you’ve stumbled and fallen. Are you going to just stop trying?

Sharks need to keep moving or they die. While humans aren’t doomed to the same fate, the same concept can still apply. Failure doesn’t necessarily mean it’s game over. The game only truly ends when you stop playing.

Need some inspiration? Before he was the beloved comedian, Jim Carrey had a hard life. His mom got sick, he had to drop out of school and he got kicked out of his house. But he kept moving forward and now he’s one of the most successful actors in the world. Dory from Finding Nemo said it best. “Just keep swimming.”

Here’s another thing to consider — now that you’re at the bottom, where else can you go but up? We know it sounds nauseatingly positive but it’s the truth. Even if it’s at a snail’s pace and you stumble every now and then, what matters is that you keep moving.

#6. Use this opportunity to reflect

Experience is the best teacher and having struggled and experienced failure, you now know best on how to avoid the same fate in the future.

Use this opportunity to learn and grow. Make your struggle your teacher. Reflect on what led you down this road and see if there are other options you can explore that will lead to a different outcome.

You can also take this time to grieve, mourn and mope. It’s healthy to do so. But once your tears are dried, pick yourself up and start reflecting. Done right, you can learn and gain new insight from anything, even failure.

It’s not easy to deal with but it happens. Life is like a wheel. Sometimes you’re up and sometimes you’re down. What matters is what you choose to do when you’re down. Will you mope around or will you work on yourself? Remember, this is just one small phase in your life. Work hard so that one day you can look back and laugh about this.

Looking to be inspired? Here’s a list of must-read books. 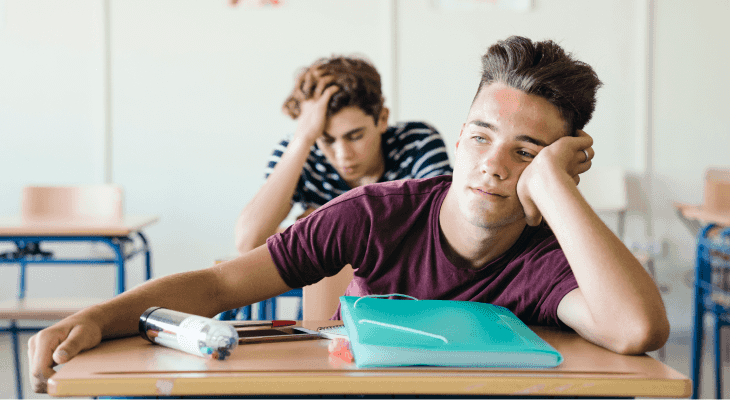 How to Survive a Boring Class in College (And Still Pass It!)